Songs from Dan out on 21 November!

Dan Tuffy’s (Big Low/Parne Gadje) first solo album is being digitally released worldwide on 21 November. Physical release is set for February 2017 under exclusive license to Continental Record Services. The album features gorgeous collaborations with Matt Walker and Lucie Thorne. It was released earlier this year in Australia and is still receiving loads of attention there. Check a song or two out at https://soundcloud.com/smoked-recordings/belinda 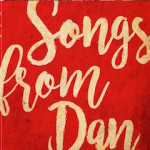 This entry was posted in Geen categorie. Bookmark the permalink.